A Tale of Three Book launches

At the moment I’m enjoying looking back to three very different book launches this autumn. We’ve never had three launches this closely together, and I’m delighted that they were successful in their own particular way.

We like to give our books the best start in life: good editing, lovely design in- and outside and a spectacular launch or, as I consider them my babies, a great christening.

Number one: Place Lamartine, a novel about Vincent van Gogh, by promising Dutch first-time author Jeroen Blokhuis, was launched in the author’s back yard, the delightful village Warnsveld in the Netherlands.

The location was exquisite: a listed gallery located in the grounds of a former local stately home. The stately home itself is gone but the gardens are still there and guests enjoyed exploring them. Jeroen’s fans were out in force, we sold out and after that we even sold some of the author’ copies (Jeroen’s sons obligingly racing home to fetch them). Enjoy the photos of the event.

Number two: the launch of 100 Dutch-Language Poems was a grand affair with the added spice of a last minute change of venue. It worked out well and we ended up in the lovely Swedenborg hall thanks to some swift reorganisation by the London Review Book Shop.

The event was sponsored by the Dutch Embassy in London and the Dutch Literary Fund. This enabled us to invite two celebrated Dutch poets, Tonnus Oosterhoff and Jules Deelder, to read at the event. Jules Deelder is quite a phenomenon, besides being an excellent poet he is also a true celebrity in the Netherlands. Deelder declared it to be a beautiful surrealistic event and I couldn’t have put it any better.

We were delighted that the Dutch Embassador Simon Smits also joined us to celebrate Dutch poetry from the medieval period to the present day. Check out the photos.

Again we sold a lot of books, prompting one of LRB’s staff to proclaim, please send more of these customers our way, they actually buy a lot of poetry books.

So on to number three: the launch of Winegarden in the magnificent Town Hall in Leamington Spa. It’s a grand place which can accommodate up to 200 people and we easily managed to fill it. The excellent front of house staff lead by Pieter were a joy to work with.

Anthony Ferner, too, is a debut author and as a just retired professor and longstanding resident of Leamington Spa he has lots of fans and friends and they had made a special effort to be there. I like selling books, well I would, wouldn’t I? But selling 106 books in just one and a half hours is a publisher’s delight. Meanwhile Anthony was kept very busy signing books but managed to take time off to introduce his book in an amusing way which you can watch on YouTube. We’ve also put up some pictures of the event.

Place Lamartine ‘ a novel in Dutch about Vincent van Gogh’s time in Arles, France
100 Dutch-Language Poems ‘ From the Medieval Period to the Present Day: beautifully selected and translated by Paul Vincent & John Irons
Winegarden ‘ a humorous look at the life of Jacob Winegarden, an agnostic, Jewish professor of Theoretical Physics who hates certainty.

and launch them successfully. The preparations are frantic and the waiting for the punters to arrive is always a bit agonising which I think this picture shows, taken one hour before the launch of Winegarden. 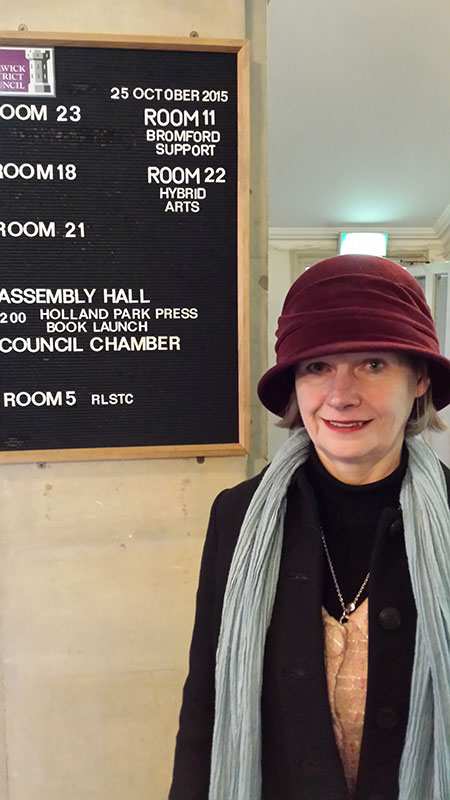 The launches turned out to be utterly delightful, but I’m now bracing myself for the tough part: convincing the readers at large to buy these books. I cannot do this alone, I need the help of discerning readers from around the world who are looking for new discoveries. So if you want to be part of something really special, buy these books and tell everyone about them. Thank you!