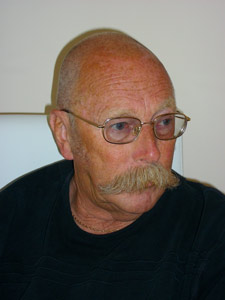 David J Ayres was born in Birmingham UK and attended Aldridge Grammar School near Walsall in the West Midlands. It was at this early stage in his life that he began writing poetry and short stories, winning an award for English Literature at school at the age of just seventeen. He already knew this was what he really wanted to do.

He obtained an honours degree in languages at Leeds University and a postgraduate qualification in teaching at the University of London. At that time, in the late Sixties, David was already having poetry published in various magazines.

He taught languages for a good few years and ventured into the fast lane by training as a private pilot in 1979. By the time he gave up aviation in 2006 to live abroad for a few years, he had logged over a thousand hours. Nowadays he does a regular four hour shift in the air traffic tower of his local airfield.

Since his university days David has played blues and rock guitar and has played lead guitar in several bands. He has since taught guitar both privately and at various college centres in the Midlands. He is still known to pick up a guitar and strike a chord!

As a language teacher David held several Head of Languages posts at secondary schools in the West Midlands and later in his career turned his attention to Special Needs education, working with secondary pupils who had been excluded or were about to be excluded from their school.

In 2007 David retired from teaching and went to live on the island of Fuerteventura in the Canaries. This proved a very creative period for him and led to the production of two anthologies of short stories, one of which became Top of the Sixties.

He also became a regular contributor to a literary magazine in the UK and a regular columnist for an online newspaper in Fuerteventura, to which he still contributes from the UK. Fuerteventura is a desert island with impressive sand dunes and rugged mountain scenery.

Although he came to love the island, his three years there gave him a new appreciation of the green lushness of England.

David has had work published regularly in magazines and anthologies and writing is still his passion in life. He has a couple of novels in print – A Minor Relationship by Minerva Press and The Called and The Chosen and The Canaries Collection by The Lichfield Press.

He tells people he writes because he can’t help it. It’s like having a runny nose that you just have to blow regularly. His main reason for writing has always been in order to be read.

He tends to relate his stories in a series of tableaux, more like cinema than a conventional book, and of major importance to him is the use of light and shadow, especially light from unusual angles.

He uses light to establish atmosphere, rather like varying the lighting on a stage, all very visual. His characters are often drawn in a sort of Dickensian way, with nervous tics, odd speech patterns and other almost theatrical eccentricities.

He feels strongly about the use of dialogue as a means of enhancing character and of pushing the plot forward. His literary influences range from Gustave Flaubert and Thomas Mann to Thomas Hardy, W. Somerset Maugham and H.G. Wells.

David talked about writing & reading and creating Top of the Sixties in this interview with The Short Review.

This a lovely picture of David Ayres with Tony Thompson, a former Mayor of Lichfield, during the promotion of Top of the Sixties at Lichfield Library.