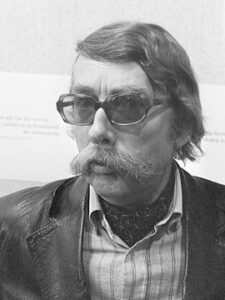 Gerrit Kouwenaar, born in 1923 in Amsterdam, is arguably one the foremost Dutch poets. He also was an author, translator and journalist.

During the Second Word War he was active in the resistance and made his debut with Vroege voorjaarsdag (Early Spring Day) a clandestine self-published poetry collection. He worked for an illegal newspaper, was arrested and sentenced to half a year in jail. Immediately after completing his prison sentence he went into hiding.

His official debut collection Achter een woord (Behind One Word) was published in 1953, and he became one of the leading lights in the 1950s movement, De Vijftigers, a group of experimental poets influenced by the COBRA avant-garde movement. His reputation grew and by the 1980s, he not only had acquired a large loyal set of readers, but he also influenced many Dutch poets.

He has won all the major Dutch language poetry and literature prizes including, in 1970, the PC Hooft Prize for his entire oeuvre, and, in 1989, the Dutch Literature Prize again for his entire oeuvre. He also translated plays by Brecht, Goethe and Sartre and wrote his last full collection Het bezit van een ruïne (Possession of a Ruin) in 2005. In 2009, the Society of Dutch Literature named Kouwenaar the recipient of its annual honour.

His poetry collection Totaal witte kamer (Totally White Room) was published by Querido in 2002. It won the Karel van de Woestijne prize in 2004 and the KANTL prize in 2005.

To underpin Gerrit Kouwenaar’s importance for present-day writers, I would like to share a comment from a contemporary Dutch poet and writer, Arnold Jansen op de Haar:

‘His poems move you because he always manages to turn something personal into something of universal appeal. Actually he writes about the transient nature of things.’

This is  how Kouwenaar talked about his work:

‘Art only deals with a couple of simple themes: life, death, injustice, beauty. You want to create something that will withstand time. Nothing is present forever. A good work of art has been stolen from time, it has outwitted merciless time.’