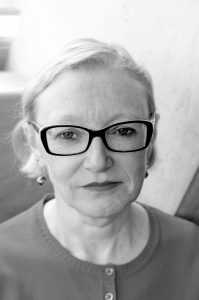 Hilaire lives in Battersea and represents South London in this collection.

London Undercurrents written together with Joolz Sparkes is her debut poetry collection.

‘I knew nothing about Battersea when I first moved to the area, and for many years my orientation was towards the West End and cultural life outside my immediate surroundings. I always loved Battersea Park, the derelict Power Station, and the blue gasometers I could see from my flat.

Then things started to change, rapidly, right on my doorstep. I began to take more note of my neighbourhood, exploring the nearby streets; walking, looking up, wondering; what was here before, who lived here before? Soon I was raiding my library for local history books, and excitedly discovering Battersea’s rich and radical past.

I had to dig deeper to find the voices and experiences of Battersea’s women, and too often there’s very little trace. How much of our shared history have we lost?

I’m inspired by the women I’ve come across in the course of this project, and I’ll keep on digging.’