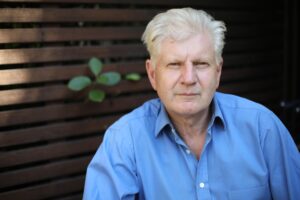 Jeremy is a writer and critic who taught English Literature to American BA students for twenty-five years at Birkbeck, University of London.  He has also taught at Cambridge University and at Hackney Adult Education Institute.

He has lived as a hippie in Wales and a squatter in London, where he was part of a group that set up one of the first short-term housing co-ops in Hackney.  He eventually received an excellent education at Birkbeck, where he was awarded a First in English; he has an MA (Distinction) in Creative and Life Writing from Goldsmiths, University of London, an M. Litt from Cambridge University and a PhD in Creative Writing from Goldsmiths (2021) where Blake Morrison was the supervisor for his memoir; the examiners were Francis Spufford and Sir Jonathan Bate.

He has reviewed for The Observer, the Times Literary Supplement, the New Statesman and many other publications.

Jeremy’s memoir, The Way to Hornsey Rise, explores how a privately educated schoolboy turns from his rural Surrey background to the squats, drugs and hippie scene of 1970s north London; the story is also about the intense relationship with his alcoholic, charismatic mother.  Beyond an engaging personal story, the narrative investigates how a 1968-style vision of the world collapsed, and the implications this has for the author and many of his generation.  A few of these themes have been touched on in Jeremy’s two collections of short stories but in the memoir he steps out of the mask and tells it as it was.

His short-story collections, Fragmented (2011) and Swimming with Diana Dors and Other Stories (2014), were published by Cinnamon Press.  His short stories have been published widely in, amongst other places, The London Magazine, Ambit, The Frogmore Papers, the Cork Literary Review, in two London Magazine anthologies of short stories (Signals 2 and Signals 3).  He won the 2009 Cinnamon Press short story prize and the Waterstones / MultiStory short story competition (2002), which was broadcast on BBC Radio Manchester.  He was the judge of an anthology of prizewinning short stories, The Day I Met Vini Reilly (Cinnamon Press, 2016).  He was shortlisted for the Jeremy Mogford £7,500 short story Prize (2016)

His poems have been published in, amongst other places, The London Magazine, The Frogmore Papers and Iota.

Jeremy is currently working on a novel set in Hackney, and on two essays about Iain Sinclair’s narratives of Hackney.  Jeremy has recently written a review for Green Letters, an ecocritical journal (2022).  Jeremy’s literary agent is Christopher Sinclair-Stevenson.

His website is www.jeremyworman.com and the photo on this page is by Sarah Williams.