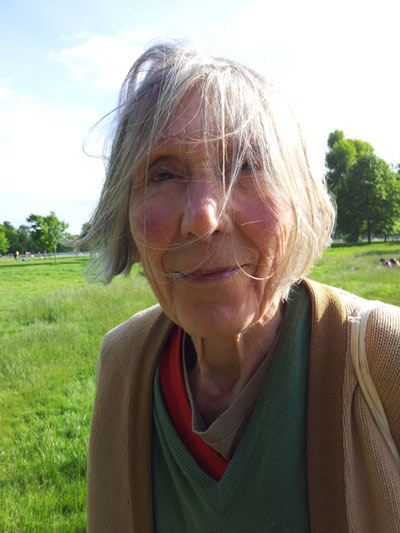 Laura Del-Rivo was born in 1934 into a middle-class family in Cheam, Surrey. After leaving school she found herself stuck in frankly boring jobs that she was, by her own accord, ‘no good at’, until she discovered Soho’s cafés and a set of like-minded people.

So she became part of a loose group of writers that included Colin Wilson and Bill Hopkins. The late fifties and early sixties were exciting times, and as Laura describes it: ‘We all exchanged manuscripts. It was a way of getting acquainted: “Here’s my manuscript, love to see yours.”’

Laura certainly benefited from this stimulating company and burst onto the literary scene in 1961 with her debut novel The Furnished Room. It was hailed by Colin Wilson as ‘one of the significant novels of the 1960s’.

In 1963 The Furnished Room was turned into a film, West 11, by the late Michael Winner, starring Alfred Lynch, Eric Portman, Kathleen Breck and Diana Dors.

After many jobs, including being a bookseller at Foyles, a Lyons counter hand and an art-school model, she jumped at the chance of running a market stall on the famous Portobello Market. At first minding an antiques stall (‘I was unexperienced, I must have sold items below their market value’), she turned her hand to selling vintage clothes and still runs a designer tights stall.

She was photographed by Ida Kar and was featured in the recent Ida Kar retrospective at the National Portrait Gallery.

Laura’s other novels include Daffodil on the Pavement and more recently Speedy and Queen Kong, which was published by Paupers’ Press in 2004.

The Furnished Room, originally published by Hutchinson & Co, was republished by Five Leaves Press in 2011. The review in the Guardian called it ‘an evocative taste of black-coffee blues’.

Laura’s hobbies include books, going for muddy walks and being left alone, though recently she has taken on the delightful duty of babysitting her grandson and granddaughter.

Throughout it all Laura kept on writing, and all these strands seem to come together in a remarkable, Pinteresque short story collection: Where is My Mask of an Honest Man?

Enjoy this interview with Laura Del-Rivo on the Culture Trip.