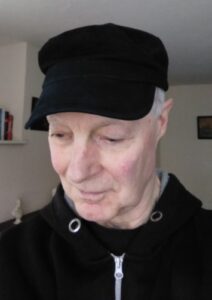 Neal Mason was born in Middlesex and educated in Norfolk. He has been writing for years, and many of his stories, monologues and poems have been published, and he has been successful in numerous play, story, and poetry competitions.

For six months, Neal was a Writer in Residence for the Arts Council in Welsh Valley. He tutored many courses for the University of Wales, WEA, Fairfield Arts Centre, and was awarded a bursary by the Arts Council.

Neal was selected for a five-day masterclass at Hay-on-Wye Festival and advised the Arts Council’s Grants to Publishers Panel. He visited many schools, writers’ groups etc. under Writers on Tour scheme.

For the last five years, he has been running soundwork-uk.co.uk, a non-profit website that records and produces free audio plays, stories, poems, and monologues for online listeners.

At the age of 74, Neal is also a competitive pole vaulter.  He has his eyes on the world record in his age category, he just needs to clear one more centimetre, but anyway, soon he will eligible for the 75+ category and then he will hold the world record.

His long-awaited new poetry collection The Past is a Dangerous Driver will be published, funds permitting, in the autumn of 2022 by Holland Park Press.