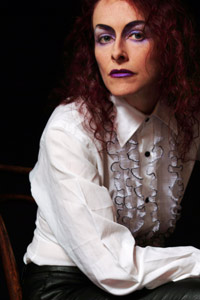 Rosie Garland is a poet, writer and performance artist.

She began her performance career as a singer with 1980s Goth band The March Violets and continues right up to the present with her current act as Rosie Lugosi the Vampire Queen.

She has won several awards, including the Dada Award for Performance Artist of the Year and the Diva Award for Solo Performer, and has performed at prestigious venues in Britain, the USA and other countries.

Rosie has written four published solo poetry collections: Hell and Eden (Dagger Press, 1997), Coming Out At Night (purpleprosepress, 2000), Creatures of the Night (purpleprosepress, 2003) and Things I Did While I was Dead (2010), which is available from Flapjack Press. Her award-winning short stories, poems and essays have been widely anthologised.

In March 2012 she won the inaugural Mslexia Novel Competition with her first novel. She acquired a new agent and within weeks landed a six-figure book deal with HarperCollins. The Palace of Curiosities, set in 1850s London, which was launched on 27 March 2013 at Waterstones Manchester.

We are delighted to publish Rosie Garland’s new poetry collection, Everything Must Go, which is a moving account of her battle with throat cancer, a devastating affliction for a performer.

There were two wonderful launch events for Everything Must Go: on Wednesday 17 October at 1 pm in Waterstones Deansgate, part of Manchester Literature Festival and at Lancaster LitFest on Thursday 18 October at 1pm in The Gallery at The Dukes. Enjoy the write-up and a picture.

During 2013 Rosie Garland poems have been commended in in both the Hippocrates & Ver Poets competitions, shortlisted in Prole Poetry Competition, runner-up in SCJ Poetry competition and she has just won the Wirral Festival of First competition. She also won the first Ariadne’s Thread Poetry Competition with The Sum of All Meat.

Also during 2013 she had poems accepted for inclusion in the following anthologies & periodicals:

Rosie’s debut novel The Palace of Curiosities was published in 2013 by Harper Collins and was the winner of the Mslexia Novel Competition 2012, longlisted for The Desmond Elliott Prize 2013, and longlisted for the Polari Prize for First Book 2014.

Her second novel Vixen was published in 2014 by Borough Press.

Rosie is based in Manchester, and this is her website. You can find more information about her performing career on the website named after her alter ego, Rosie Lugosi.