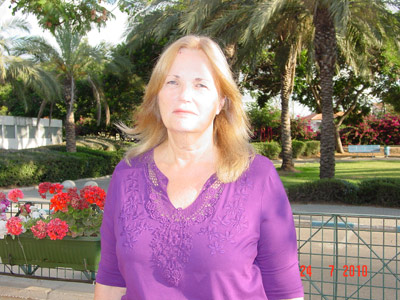 In 1973 she decided to move to Israel. She spent the first few months in Kibbutz Regavim in the beautiful Menashe area which is also known as the ‘Tuscany of Israel’.

She lived in Jerusalem for a short while before moving to Kibbutz Ein Tsurim. These days it is located near Ashkelon and Kiryat Malachi, but originally it was one of the Gush Etzion (the Etzion Bloc) settlements.

That is how she came to know about Kfar Etzion and its dramatic true story, the backdrop of her debut novel The Lonely Tree. Every home contained books and pamphlets about what had happened and many inhabitants had taken part in the battles.

She spent fourteen years in Gush Katif in the Gaza strip where she raised her children. She felt at home there. So one can imagine how terrible it was for her when the first uprising began and one was no longer safe.

This got Yael thinking how difficult life must have been for the earlier settlers in Kfar Etzion without the backing of an army. Hence the seeds were sown for a novel.

Yael left Gush Katif for Jerusalem and Ashdod but she is no city girl and moved back to Pardes Hanna in the beautiful Menashe area, where she now lives.

In Israel she studied toward an MA in Holocaust Studies at the Hebrew University of Jerusalem and completed a course in Technical Writing and Desktop Publishing at the Yeda Institute in Tel Aviv.

She has held a number of positions, often to do with her talent for writing and her knowledge of English and Hebrew. She has translated a number of books and stories from Hebrew into English.

Until recently, before retiring, Yael worked as a Proposal Writer and Editor in the Aerospace industry. She is very glad that she has now more time to write especially as she is well into a new series aboout Olivia, a feisty woman living in 19th century America.