I was woken at 6.39am by birdsong, and a fusillade of explosions within the trailer.

I was in Cornwall, in the grounds of a writer who used the trailer to shelve books and to put up visitors. The crucial books, including his own works, were in the house. The trailer contained mainly 20th century fiction; and a detective magazine. Evidently the books were neglected: the tops of the volumes were coated in the sticky filaments of cobwebs in fusion or meltdown. The pages smelt of camphor.

Outside, the grounds were partly wild, partly cultivated with roses and fuchsia. Pine trees at the edge of the land were colonised by jackdaws that clattered up and down like typewriter keys. At one place the trees parted to reveal a headland development of chalet-bungalows whose gardens neatly blazed scarlet and azure; and the sudden, gleaming, obtuse-angled cone of the bay.
The books were the explosives. They were firing out the letters and punctuations of their words. Millions of black signs were being violently expelled from their pages. A’s and s’s and apostrophes burst or forced furrows through the clothbound or rexine bindings and savaged a 6-volume saga in gilded burgundy morocco.

I was mobbed by a pandemonium of signs wrenched from their meanings. Those which hit me did no harm but seemed by some kink or sleight of physics to pass through my body undetected.
My itchy mind raced round this brutalist etymology. It was my daughter-in-law Clair, whose intelligence was a form of karate, who had pointed out that words were arbitrary. There was no first cause why a table was called a table. We had been in her kitchen. Her scaffolding bookshelves supported a section on semiotics. I had worn ex-NATO camouflage trousers and a shirt designed for gays (get you) with glitter threads woven through its flimsy fabric. Clair had worn ripped jeans and a T-shirt whose central boss was a tiger head. She had been packing sandpit toys, water bottle and the children’s emergency clothing into a knapsack for Holland Park.

‘Can we have ice cream?’

She had simultaneously qualified ‘Except for onomatopoeia. Yes. Semiotics. From the Greek seme, sign. As in semaphore and semantics.’ I had then disqualified myself because it was not the evolution or interior logic of language that Clair had cleanly dispatched.

Our discussion connected to a local accident. Builders had put up scaffolding in front of a house but had neglected to attach the system of planks and poles to that house or to anything other than itself. The complex structure and word-surges of language, with its logic not necessarily coinciding with truth, was also a system attached only to itself that could catastrophically crash; although Clair had used language to critique language.

Was thought possible without words? Babies and birds thought wordlessly. On this Cornish holiday I had watched a pair of raptors (rapacious, rape, SHUT UP) gliding high on white-barred wings with ragged ailerons. They had followed a tractor whose machinery scythed a hayfield. I had reasoned out the kites’ expectations. Their unknowable code, which paralleled thought, had broken like my own on a small, hot creature with bloodied fur.

I pulled on my jungle warfare trousers and another top of dubious sexuality; this one a sort of mohair vest. The books were dementedly exploding their print; the signs that deconstructed in mid-air into dots and dashes of matter; the dust motes shaken from the wings of birds.

The novels included several which my parents had enjoyed. My parents had been that conscientious type who at the end of the world would panic ‘Oh dear. It’s the end of the world and we haven’t returned our library books.’ The authors had been reviewed in the broadsheets, displayed in all good bookshops, reprinted in popular editions and serialised on the radio. The exception was the detective magazine whose illustrated gumshoe smoked his way through his deck of Luckies while his dame, whose hair was the colour of poppies, wore the famous dress so tight it must have been painted on.

The angry morse which detonated from the books was the code whereby Roquentin had confronted the tree root; Raskalnikov the pawnbroker; Jane Eyre Mr Rochester. Within the books in the trailer, it had created war zones, country houses, cafes, bedrooms and scenery.

The mass of particles, the a’s and s’s and apostrophes cited, had been given meaning. When that meaning was withdrawn they degenerated into idiocy. Although some swooped in fractals like starlings, others had regressed to foolishly jumping up and down on their own books. There was a racket of clacking and cawing.

I walked through the chaos to make tea. The water tap worked in the familiar way by turning the spigot. I did not have to understand the new code of taps that was not explained in the toilets of parks and departments stores. The electric cooker had been, when installed in the 1950s, the most modern. Its sputnik-shaped dials referenced the control panel of a space ship. Like a black-and-white TV space series, it was both futuristic and outdated.

I sat on the moulded plastic chair outside the trailer to drink the tea. The nearby rose bush was a crimson and white hybrid whose scent contained cindery heat: ashes of roses. The fact of summer elated me despite the mass suicide of words from the bookshelves. I could hear a blackbird as well as jackdaws that typed themselves into the sky above the pines. The brightness of the light bleached my sight so that white objects, such as the ornamental shells that bordered a flowerbed, appeared fluorescent mauve.

(Calcium, calcul, a pebble used for calculation, a number eg 6 not just 6 pebbles but having properties in its own right, such as being a perfect number, such as dividing into 10 1.666666666 infinitely recurring SHUT UP.)

I was too hot in the angora vest.

In the trailer, the print was quiescent. Instead, the dust-jacked photo of its author balanced on each book or set of books.
The men were handsome in the bohemian style: generally long-haired; several bearded. One old boy wore a Panama hat, linen jacket and MCC tie. The younger wore tweeds and corduroy, or duffel coats and jeans. An emaciated punk was rolling one of the joints that had rocked his metaphors. His words had winged it to mean whatever he had wanted them to mean. His jumper made of safety-pins and fluff was edgier than my own.

Of the women, one had been famous for acerbic remarks at Hampstead wine parties; another for delightful tipsiness at Soho lunches. A girl of mixed race, with Afro hair, wore workman’s overalls and Dr Marten Boots. Her first, and only, novel, set in a Northern seaport, had been acclaimed.

All the photographs were looking round to see who else was there and whether there were any free drinks. Some contested their demotion to the trailer.

‘A capitalist conspiracy against my trilogy.’

‘I say, could you possibly change a small cheque?’

I addressed them in the foul-mouthed manner of haughty Tourette.

‘Well what did you fucking expect? Just because some shite critic wrote “deeply perceptive” or “a talent to look out for” did you think you were immortal? Probably one of those critics was your lover and the other expected a reciprocal review next week. You hadn’t got a “potentially the finest writer of his generation” to piss in. (Pissed off. Piss off! Piss artist. Take the piss. Piss up. The word is amphibious as a newt. SHUT UP.) You were fortunate to get in during the mahogany desk era, when there was a door with a Georgian fanlight, and the publisher’s name in gilt, and the gentleman publisher himself behind his desk with his stable of bright young editors. Eventually your novel in its dust-jacket from an artist’s drawing-board would be delivered by messenger to the desk of the distinguished broadsheet whose review would appear next Sunday. What an innocent privileged age!’

The photographs were sipping frothy coffee from colourless Perspex hemispheres. A bottle of gin was circulating. There was a scandal about contemporaries.

‘Left the manuscript in a taxi.’

‘Cupcake! Those nasty academics and your Tudor Temptresses!’

I said, ‘Hubris. We are prejudiced in our own favour, for rationality against other ways of being.’

The turbulence remaining from fission raised a few singed feathers from the sticky dust on the dishevelled books. Only the detective magazine seemed unaffected, possibly because most of its words were graphics of exclamations. WHAMM!!! SCRAMM!!! The badly-drawn heroine, whose feet were too small, with two red daubs of dress between shiny beige breasts and shiny beige legs, relaunched herself as kitsch and betrayed her detective for a handsome author.

‘Hello, big boy, I could really split my infinitives for you.’

I said, ‘Your life’s work, your compensation, is forgotten in a trailer. Your faithless lover, with her poppy or geranium hair; your childhood; your war; your phrase suddenly arrived from God when you were half way up an escalator of the Northern line; your clever plot; your angst; your existential epiphany; everything you wrote and rewrote and laboured to make real is unstable and disintegrating.’

I desperately jerked and twitched in solidarity with the writers who had read through their own work and seen it shift like a holograph from genius to shite.

‘This is no time for tight-arsed pedantry. It doesn’t matter if your slip shows or your gerund dangles. It’s not only your typeface demolished here. It’s language itself. Even the language of the divine Wittgenstein with his face of a degenerate child-molester. I always thought that we do not experience death because the experiencer no longer exists. Death and the experiencer race to the light at the end of a photo finish.’ Then I found I had said it Concisely.

‘Death is not an experience in life.’

In a panic I realised I was unwell. My spirits were evaporating upwards while sweat slunk downward. My mouth was stuffed with fabric like plush or moquette whose fibres conducted electricity.

The photographs faded away. The shelved books were as undisturbed as when I had first seen them, under the tough sticky membrane of neglect. A few broken feathers lay across them.

My place in the trailer was not random. I could have asked to stay in the house. The trailer was a category that included myself.

I had to choose what to do. Choice however depended on the choices tasting interesting on the mind’s tongue. What happened if they were flavourless? If an appalled ennui undermined all choice?

I was deranged. I suffered from disjointed movements and obscene outbursts. I couldn’t leave a word or a number alone without analysing or poking it. My clothes were transgender.

It was a short walk to the place where the pine trees parted to reveal the mass, which had the properties of both liquid and solid, of the bay. Overhead, jackdaws swarmed like iron fillings. There was a signal, faint at first, that I also was being pulled. I was circling the field of attraction of a workable idea.

Back in the trailer, I started to compose. The result was somewhat deformed, as if by some inner malfunction of its author. Over the next year the poor bird was re-slaughtered, rewritten, replumed. It started:

I was woken at 6.39 by birdsong and a fusillade of explosions within the trailer.

This is my swansong.

Enjoyed reading this? Then you should get a copy of Laura’s remarkable short story collection Where is My Mask of an Honest Man 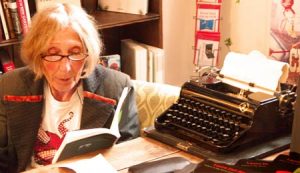