Upturned Earth, a new novel by Karen Jennings, takes us to Namaqualand, the copper mining district of the Cape Colony during the winter of 1886.

We join William Hull on his journey from Cape Town, he is seasick throughout, to take up his position as magistrate which, he discovers, has been offered to him because no other man would take it.

Upon arrival in Okiep he is not impressed: ‘The bulk of the town – roads, hillocks, plains – was black with slag.’  Yet, he is determined is make it work:  ‘He would be firm. Punishment would be meted out. The law would be laid down.’  Though he will soon learn that the CCMC – the Cape Copper Mining Company – is a law unto itself.

The Cape Copper Mining Company did exist, but the events described in Upturned Earth are fictional.

Next we are introduced to another protagonist, Molefi Noki, a miner, when he is on his way back from his village in the Idutywa Reserve situated in the Transkei Territory. This is his first visit in five years. After months of helping the villagers with planting and harvesting, he has to go back to job in the Okiep mine, and leave his heavily pregnant wife behind.

It is through these two contrasting figures Hull, seen as being in the pocket of the CCMC management, whether he likes it or not, and Noki clinging on to his job, that a gripping picture emerges of life in and around the copper mines.

The volatile relationship between the miners and management is presented in a delicate, engrossing way. Life may be hard down in the mines but acts of a caring human nature shine through.

Along the way we find out that the miners are not a homogeneous group, they’re made up of white folk having emigrated, the original black population, and the Baster, who are descendants from the bastard children of Dutch men and native women. This gives them a sense of pride, most apparent in their leader their leader, Kaptijn Adam Waterboer.

How does this diverse community copes with the calamities mining tends to inflict on its workforce? Karen’s sensitive account of daily life creates a riveting story that makes you root for Hull and Noki.

At the start of the story, our seasick magistrate Hull meets Mrs McBride, a much put-upon young widow, who tried her best to run away from the influence of the CCMC. How will their relation develop and will it lead to something that gives hope for the future?

Jennings makes you think about what’s good and bad, which side you should be on, something that is often not really such a clear-cut choice. She gives a voice to people who even in today’s society struggle to make themselves heard.

As Karen sums it up: at the very least Upturned Earth exists as a comment on the history of commercial mining in South Africa – the exploitation, conditions and corruption that began in the 1850s and continue to the present. 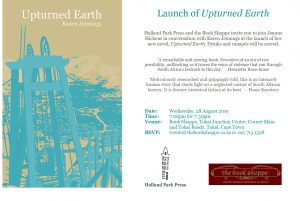 ‘A remarkable and moving book. Evocative of an era of raw possibility; unflinching as it traces the veins of violence that run through South Africa’s bedrock to this day.’ – Henrietta Rose-Innes

‘A mythical tale of heart and soul, cruelty and courage, fear and redemption. A compelling and at times mesmeric read, this story is seamlessly told, of a mining town and the men trapped in a system of manipulation and cruelty. Upturned Earth has deep meaning and resonance with contemporary mining and social issues. Riveting, engrossing, mesmeric…’ – Joanne Hichens

‘Karen Jennings writes with a glinting vividness that erases the years between us and the 1880s. Her modern sensibility reminds us that the plight of miners has hardly changed in the last 130 years. Meticulously researched and grippingly told, this is an intensely human story that sheds light on a neglected corner of South African history. It is literary historical fiction at its best, contributing to a growing genre of post-Marikana writing.’ – Fiona Snyckers

‘Upturned Earth is her fifth book, showcasing her striking talent that is maturing with every new publication.
Her creative consciousness is steeped in the African imaginary. Her latest novel is an incisive contribution to our understanding of what it means to endure a system that ‘no individual could ever hope to alter or redeem’.’ – Karina M Szczurek in the Cape Times

‘I would so much like to think of William and his Mrs McBride slipping away in the twilight towards a happier, nicer place. But Karen Jennings may have more sober things in mind for them. This is a memorable novel, beautifully conceived and cleverly written. I, for one, will seek out more of Karen Jennings’ work.’ – Julia Stoneham in Historical Novel Review Issue 91

‘As a reader you’re hooked from the very beginning and I found I got completely immersed in the story and lives of Hull and Noki.
The combined descriptions of the harsh reality of living in a mining village at that time, its wild and beautiful landscape and the unfairness of the contrast between white and native workers makes this a heart-breaking story I won’t forget.’ – Elena on Jera’s Jamboree

‘In sum, this is a novel about important subjects (the past (and not so past) history of the mining industry in South Africa, social justice, corruption, beautifully written but horrifying at the same time. I recommend it to people interested in discovering new voices, in stories about unusual subject, especially those set in South Africa, and, in general to anybody eager to read an interesting, but harsh, and well-written historical novel. It’s a must-read.’ – Olga Núñez Miret on her blog

‘Upturned Earth brings to life the history of a miners’ conflict in 1886, filling in the characters and details from historical documents and creating credible fictional characters to produce a satisfying story. Karen Jennings shows characters struggling to overcome their circumstances. Although Upturned Earth is a historical novel, its concerns and themes of struggles against poverty and the widening gap between the wealthy and poor, have contemporary relevance.’ – Emma Lee on her blog

‘Upturned Earth is a novel with the power to shock. I have to applaud Jennings for her deft balancing of so many strands: from a ghoulish, almost gothic-horror subplot involving the jailer, to two catastrophic events that both have relevance for contemporary times. The title could not be more apt, for here we have history excavated, shaken up, the truth of the violence which continues to this day brought to light.’ – Ellie Hawkes on Elspells

‘The perfectly titled Upturned earth is Jennings’ third novel. Her writing is tight and expressive. The theme is clear from the start – man’s inhumanity to man (especially in these colonial environments) and what can be done about it. Pondering what has changed and what hasn’t is why we read historical fiction. I enjoyed this book.’ – Whispering Gums

‘The author is new to me and I was very impressed by Upturned Earth so will seek out more of her work. The plot alternates between an educated white man who’s the authority figure and a black mining labourer. The author really brings the place and era to life. Impressive!’ – Pamela Scott on the Book Lover’s Boudoir

‘Coming across book blogger reviews on Twitter, I was drawn to the story and I wasn’t disappointed and have ordered two more of this author’s novels. How could I read this in lockdown without thinking of health and social care staff battling coronavirus with inadequate PPE? Even worse, a news story of a private care home cutting pay because of the increased costs of the pandemic, echoed the predicament of the miners in this novel when the mine reopened.’ – Anne Goodwin on her blog

‘My review of this book should be published by the Sunday Times soon, but just to say that this was a beautifully written book and is well worth reading.’ – Jen Thorpe on Goodreads

‘It is a slim book, but that does not limit its ability to grapple with weighty topics. Drawing from real events in the distant and recent past, Jennings takes the reader on a journey, digging up and exposing persistent fault lines of power.’ – Jen Thorpe in the South African Sunday Times

‘The well constructed narrative by Karen Jennings brings forth a gallery of human portraits finely drawn. She draws her inspiration from real events, past and present, from the history of South Africa, and means to raise awareness on the miners’ life conditions.’ – Ioana Danaila  in the African Book Review

‘What a story! Richly detailed, this is one which kept me hooked from beginning to end. This is a part of history that I knew nothing about but I relished discovering. Captivating and packed with interesting details, this novel is complex and involved and, ultimately, a rewarding read.’ – Grace on Reviewerlady

‘Sympathising with Noki and to some extent with Hull, the reader is drawn into the unfolding disastrous story to make a racy and unusual novel.
This book enlivens history, the purpose of historical fiction, and looks critically at an actual industry, which is something that can be done better in fiction than in reports. A nicely produced book and a worthwhile read.’ – Sally Evans on Everybody’s Reviewing

‘The story is South African, but in truth it could be anywhere, it could equally be set in the desert mining towns of Australia or against the story of the Lena river gold miners in Tsarist Russia.
Hull’s awakening turns what at first seems a gentle story into something quite powerful.’ – moncur_d LibraryThing

‘While the almost starving copper miners are digging the tunnels of the mine abominable atrocities are come to surface. Easy read echoing long gone labour exploitation to our days.’ – viennamax on LibraryThing

‘The content of the story was interesting and told in an easy style. I would recommend it to gain insight into the hardships forced upon natives and also to get some perspective into the opinions of the settlers.’ – Jewlzee on LibraryThing

‘It is an insightful, atmospheric novel. As I’m not familiar with the history of mining in South Africa, the story gets me thinking and imagining each character and the scenery around them.’ – Maya on goodreads