Very sad news, one of our authors, the inimitable Jules Deelder, has died today after a short illness having recently celebrated his 75th birthday with a big event in his beloved Rotterdam. The world of poetry will miss his distinct beat voice.

Publisher Bernadette Jansen op de Haar said: ‘I still savor the memory of meeting Jules Deelder during the launch of 100 Dutch-Language Poems. He spoke in English without notes and, of course, conjured up a bit of delicious controversy, and he was a delightful guest at the dinner at afterwards.’

Our thoughts are with his daughter Ari who travelled with him to London and who managed his affairs and his long standing companion Annemarie Fok.

To get a taste of Jules Deelder’s work, read ‘The Battle of Arsekettleprickfort’ from Transeuropa published by Holland Park Press in August 2019, translator Scott Emblen Jarrett. 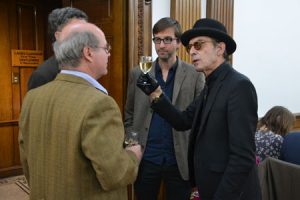