Merry Christmas to all of you from Arnold and Bernadette at Holland Park Press.

For the first time since Christmas 2012 my parents Christmas crib is on display again. The statues and paper date back to Christmas 1952 when my parents bought it in the second year of their marriage (they bought a radio for their first Christmas together). It was my father’s task to build the crib each year and, each year,  I very much enjoyed watching the crib take shape. His one was much bigger with statues at different levels. 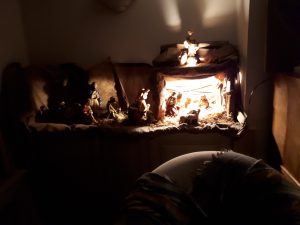 When he was growing up my father also used to build the crib for his parents. He even build one in 1944 when his home town Nijmegen had just been liberated. His crib was a great hit with British army personal stationed in Nijmegen.

The first time I went back to the Netherlands after moving to England I gave my parents mince pies. I had never seen or tasted them before and to this day their one of the few sweet things I really enjoy. To my surprise for my father recognised them immediately: ‘Ah these are the English Christmas cakes! They flew in the ingredients and baked them here. Absolutely delicious’.

They became a Christmas tradition together with the making of ‘Balkenbrij’ the traditional Dutch meat loaf eaten fried for breakfast. Yes, Arnold has made one following my grandmother’s recipe.

After finish the crib adding the decorations to the Christmas tree it was time for a glass of wine. 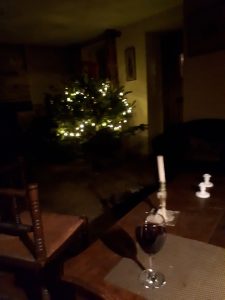 Happy New Year and the very best wishes & books for 2019!