On 25 July, Harry, a black with a brown hue Labrador, turned 15 months. He has come a long way from being the destroyer of twenty garments with his sharp puppy teeth.

Nowadays he’s dozing on the floor of my study while I am working and knows that the only things he can shred are bits and pieces out of the wastepaper basket. He even got used to the sound of the printer.

He takes a keen interest in everything that happens outside and put his paws on the windowsill to have a good look. No one is more enthusiastic than Harry when a sample of a new book arrives. Not that he appreciates the text or cover but he will jumping up in excitement because the cardboard wrapper will be his. 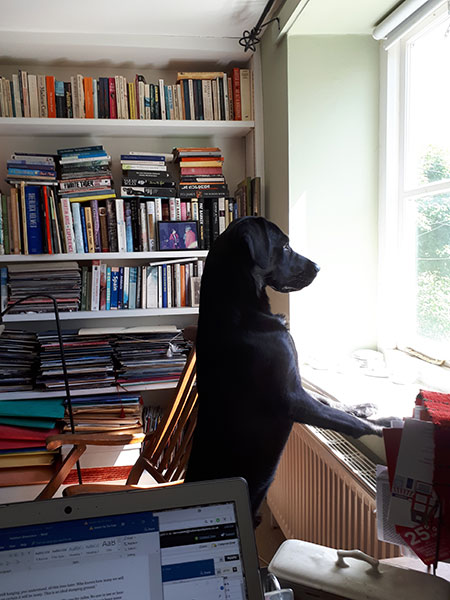 Harry takes most things in his stride and doesn’t get too excited about anything, especially not other dogs barking. He only barks when very angry or very frightened. However, he doesn’t like me talking on the phone, he starts nudging my elbow with increasing vigour.

Quite amusingly, he absolutely hates and is frightened of the following phenomena:

He’s getting better in this hot weather though, for us, it means striding through a field at 8 o’clock in the morning, but for this I cannot blame him, wouldn’t you feel hot and bothered if you were permanently wearing a cross between a wetsuit and a fur coat?

But he is very good with books, he knows these are not for doggies!