When you deal with books and authors you can find yourself in all sorts of places and situations. For example, I’ve never tried to combine being guest at a wedding lunch with running a market stall, but a couple of weeks’ ago I did just that.

So, at the beginning of this month, there I was at the wedding lunch with an author, my brother Arnold Jansen op de Haar, and I could just about see our stall through an increasingly alcoholic haze. The friendly trader next to us kept an eye on our stall, and the one time I quickly popped over to the stall to check if everything was OK, I promptly sold a book.

Suddenly, it was well after five o’clock, stall break-up time had actually passed, so I rushed over to pack up the stall. I’ve never packed the stall in between courses (actually just before the wedding cake) of a wedding feast, but all the books safely made it home. For a much more atmospheric account of what happened that Saturday read Portobello Hipster.

Earlier this month, there was another outing, again with books and author, to the reception to mark five years of celebrating British fiction which the announcement of the eight winners of the Jerwood Fiction Uncovered Prize 2015.

I was there because we published The Stray American, and this remarkable book by Wendy Brandmark was longlisted for the prize. The Jerwood space is a wonderfully atmospheric venue and they had made a lovely display of all the longlisted books. 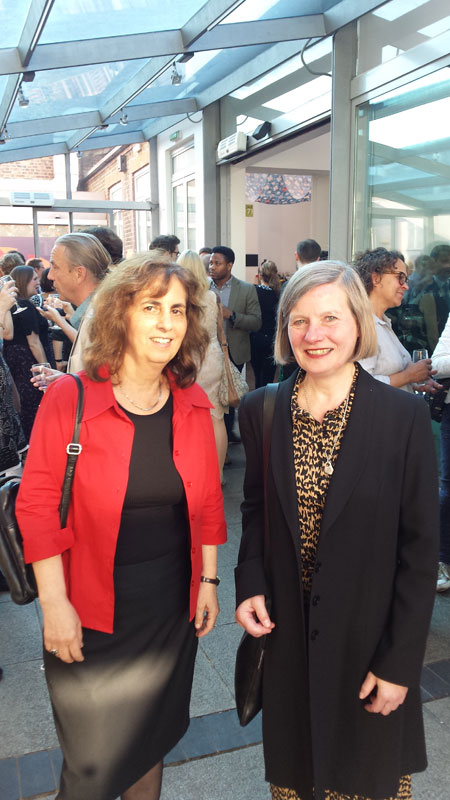 I, the publisher, was very proud: Wendy and I (with respectively daughter and brother in tow) were guests of honour and there was even a chance of winning a prize. Alas, it was not to be, you cannot win every time, and I felt very sorry for the talented Wendy Brandmark, I so wanted her to win, but it was, of course, out of my hands.

Literary fiction is a question of taste, and so I do not envy the judges who have to come to a decision. The process of naming a winner is always hard on the authors who miss out, but I think Jerwood Fiction Uncovered ran a sensitive operation. This was the judges’ verdict of The Stray American:

“In giving us an anti-hero for our time in the shape of an American in Wimbledon looking for love, Brandmark reveals the absurdities of relationships with wit and without cynicism. This book delights in language and foibles.”

And I couldn’t agree more.

Shortly afterwards, in a blaze of publicity, Grey by EL James was published, prompting the Jerwood Fiction Uncovered Prize to start a mini online campaign under the hashtag #BritishwritingisnotallGrey . It’s a laudable initiative, but maybe we should generalise it a bit more and use #FictionisnotGrey. The latter hashtag also uses fewer precious Twitter characters.

Now, on to the latest outing, when our oldest author, Laura Del-Rivo, took us on a visit to Kew Gardens. We (the complete Holland Park Press staff) had never been, and the plants were beautiful, but I must say the conversation was more centred on writing and writers. Someone like Laura, whose debut novel The Furnished Room was published in 1961, has seen an enormous change in the world of publishing. 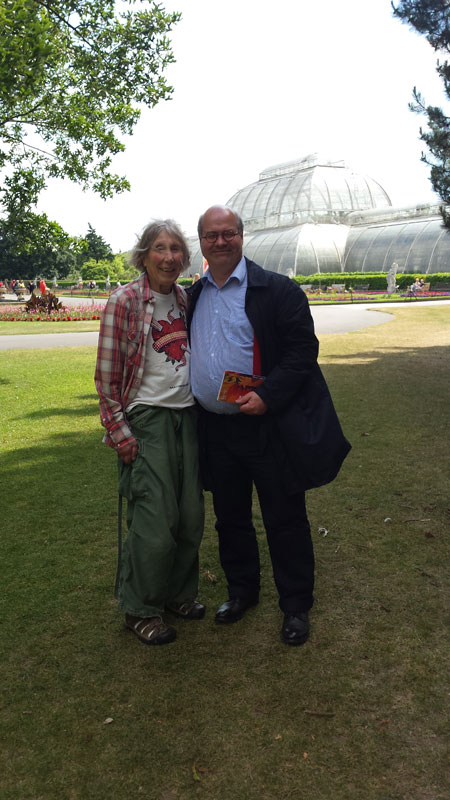 What’s more she likes to keep up with things, and was bemoaning the fact that it is hard to keep abreast of the new terminology associated with the use of the internet. Especially as she’s very interested in the origin of words. Take bitcoin for example, which she had encountered during her weekly perusals of the Observer. I dug deep into my memory of all things related to computers and offered: coin that’s clear, and bit stands for binary digit, the basic unit of information.

Anyway, it’s wonderful to spend time with an inquisitive octogenarian, admiring plants and discussing literature right under the Heathrow flight path. Laura is also keeping up with times in other ways because recently her market stall was filmed as part of a video clip for a new song by The Clash. Hopefully, this doesn’t end up on the cutting floor in the same way her stall just missed out on being in Notting Hill, the film.