Proud to have discovered Karen Jennings

In 2012 an unsolicited manuscript landed in my inbox to which I took an instant liking. Later that year, we published Finding Soutbek, a debut novel by Karen Jennings.

Karen told me she had problem getting it published in her home country South Africa because it didn’t have a cheerful enough ending. I actually admired the sensitive but frank manner in which she championed the plight of poor black South Africans in this novel.

Finding Soutbek achieved critical acclaim and was shortlisted for the inaugural Etisalat Prize as well as translated into French (Les oubliés du Cap, L’Aube, 2017) but, nonetheless, generated only modest sales.

I very much believe in giving books and authors time to find their audience. So, I kept supporting Karen and published:

Away from the Dead, a short story collection in 2014;

Travels with My Father, an autobiographical novel, in 2016;

Space Inhabited by Echoes, a poetry collection, in 2018.

All to critical acclaim but with modest sales, but I kept them in print and orders continued to trickle in. To encourage sales, I even acquired a South African distributor and started printing in Cape Town.

Then in 2018, I received two manuscripts from Karen’s newly acquired agent: Harbour’s Breast and Upturned Earth.

Both books were wonderfully written but it was Upturned Earth that caught my attention. Why? Because it was dealing with an important issue: the exploitation of miners. Moreover, the novel is squarely set in Namaqualand in the Cape Colony during the winter of 1886, and has two protagonists whose characters leap of the page and stay with you: William Hull, a white magistrate and Molefi Noki, a black miner.

I couldn’t publish both manuscripts so I decided to publish the one which had the edge: Upturned Earth.

I have never regretted this decision even though Harbour’s Breast was published by another publisher with the title An Island (Holland House Books, 2020) and subsequently longlisted for the 2021 Booker prize.

I’m proud to have discovered Karen and hope that her wonderful list (I hate the word backlist, we have only one list: the list) has had and will continue to bring further success to her writing career. 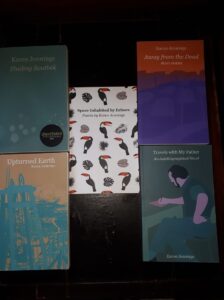