‘How can you bear all that noise and turmoil?’ asked old Mrs van Raat of Mrs van Erlevoort, and she looked at her smilingly, but wonderingly, with her sad, lacklustre eyes.
There was a sudden calm after the exodus of the children. They left the dining room, where the toys were still scattered about; they closed the door, and the guests went into the double drawing room, where Mrs van Erlevoort poured out tea.
‘How can I bear it, Madame? I feel alive again, it rejuvenates me. I need the liveliness of youth about me. I never spent a drearier time than when my daughters and my son Théodore were married, and yet I still had three children left to me. But I love having the little ones around me; there is nothing like their wild gaiety to keep me refreshed. May I pour you out another cup?’
Mrs van Raat passed over her cup, and envied Mrs van Erlevoort her youthful vivacity with her grey hairs. She compared her with herself, and her own melancholy solitude, which she felt doubly keenly after her former life of cloudless happiness, and her present existence stood out in cruel contrast to the old age of that happy grandmama, surrounded by joy.
‘And you don’t know how sorry I am that I see so little of Théodore’s six children. The boy is in love with country life, and won’t hear of it when I attempt to persuade him to come and live in The Hague.’
‘Your daughter in England has only one child, has she not?’ asked Mrs Verstraeten and Mrs van Stralenburg.
Mrs van Erlevoort bent down to Mrs Verstraeten and whispered something mysterious in her ear, whilst in reply to Mr Verstraeten, who nodded to her smilingly, she archly winked an eye.
Mrs van Erlevoort was just telling how the little van Rijssels had put their shoes near the fire in expectation of receiving St Nicholas’ sweets  the previous evening, when Henk and Jan Verstraeten came in, both smiling, Henk with a very red face. Mathilde too came back, and many nice things were said about the children. Suddenly there was a furious ringing of the doorbell.
All eyes turned to the door as it opened. Willem, Truitje and Rika between them dragged a big box into the room, towards Mrs van Erlevoort.
‘Oh!’ exclaimed Frédérique, ‘that is the box from London!’
Mrs van Erlevoort informed Mrs van Raat that every year at St Nicholas, her son-in-law Percy Howard sent her a big box containing something for everybody. Willem, armed with chisel and pincers, and assisted by Etienne, removed the screws and nails. Everyone watched expectantly, and the shower of presents commenced.
Eline made a nice display of her presents. Oh, how she was being spoilt, she declared, radiant with smiles. From Martha’s hand she took another packet; slowly she broke the string, cautiously looking for a seal, or some label or cipher, to give her a clue to the sender. But she found nothing of the kind. The address ran simply ‘Mdlle. E. Vere’. It was a grey leather case; she opened it, wondering who could have sent it. Inside the case, resting on the grey velvet, lay a fan of beautifully carved mother-of-pearl. She picked it up, and slowly opened it; she looked at it in admiration.
‘Bucchi!’ she said quietly, as she read the name of the painter at the bottom, ‘Bucchi!’
The fan was indeed painted by the Italian artist, a fantasy of roses and fairies on a background of ivory satin.
‘Who could this come from?’ she said. ‘How splendid!’
Everyone rose and crowded round Eline, who carefully held the fan open, and the costly gift attracted general admiration. Eline was astonished. From Mrs van Raat she had had a perfume set, that she knew; from Henk and Betsy…
‘Betsy dear, should I thank you for this?’ she asked, rising.
Betsy shook her head.
‘Parole d’honneur… not me, Eline.’
Of course, she had had a bracelet from Betsy and Henk, but then who sent this fan?
‘Would it be from… Vincent perhaps?’ she asked.
‘From Vincent? No, no, what put that into your head? What young man would give such a present? Let me look at it.’
Eline handed her the fan.
‘It is really magnificent,’ said Betsy.
Eline shook her head, quite at a loss for a clue. Meanwhile the fan was passed from hand to hand, and Eline carefully scanned everyone’s face, but she could not pick up the least sign from any of them. But suddenly Frédérique raised her head, with a look of surprise on her face. She quickly recovered herself, and with apparent indifference approached Eline.
‘May I see the case one moment?’ she asked.
Eline handed her the case, and Frédérique eagerly scrutinized and felt the grey leather and the grey velvet.
‘Have you got the slightest idea who could have sent me that?’ asked Eline, and she raised her arms in mock despair.
Frédérique shrugged her shoulders, and laid the case down.
‘No… I really don’t know,’ she said, somewhat coolly, and she looked with some curiosity into Eline’s hazel eyes.
An indefinable antipathy seemed to her to radiate from those gazelle-like eyes, and to lie hidden in Eline’s mock despair at the unknown giver. She did not cast another glance at the universally admired fan, and during the remainder of the evening she was quieter than she had ever been before.

The torrent of presents had ceased. Mrs van Erlevoort asked her guests to abandon her two terribly disarranged drawing rooms, full of paper, straw, bran and rubbish, when Willem once more opened the doors of the dining room; the table, laid ready for supper, looked bright and inviting enough.
It was a gay and lively supper party. Mr Verstraeten kept Mrs van Erlevoort and Betsy, between whom he was seated, amused with his jokes, and Mathilde, next to Betsy, often joined in the laughter. Henk, seated between his mother and his aunt, wanted for nothing; whilst Otto and Eline were busily engaged in conversation, and Etienne chattered noisily with Lili and Marie.
‘Freddie, how quiet you are, chère amie,’ said Paul, as he took some lobster salad, seeking in vain to get his neighbour talking – she was generally animated enough. ‘Didn’t receive as many presents as you would have liked, perhaps?’
‘Quiet, am I quiet? How can you say such a thing?’ answered Freddie, and she began to chatter with great animation, which sounded like an echo of Etienne’s. But still there was something artificial about it; her laugh was not always hearty; and every now and then she stole a furtive glance at Eline, as she sat there, brilliant in her beauty, chatting vivaciously with Otto. Yes, there was something very fascinating about her, something of a siren’s charm; her beautiful dreamy eyes were half closed as she laughed, while the soft line of her delicate lips faded away in two small dimples. And those beautiful hands, peeping out so white from amid the black lace and dark red bows of her bodice, and that coquettish-looking diamond, one single brilliant stone, trembling like a drop of crystal in the black tulle round her throat. Yes, Frédérique thought her bewitching; but still, she could not help it, she thought her antipathetic; and almost with anxiety her eyes followed Otto, whose glance seemed riveted to the siren.
Meanwhile, however, she continued laughing and talking with Paul, Etienne, Lili and Marie, and old Mrs van Raat declared across the table that Frédérique, the family’s fountain of fun, was thoroughly living up to her reputation.
The champagne streamed into the glasses, and Mr Verstraeten drank a toast to the ever-youthful hostess, with her beautiful white hair, and thanked her with a kiss for such a jolly evening. Eline and Otto drank together to some toast of which Frédérique could not catch the words, and which she would gladly have given her best present to understand; but still she did not ask.
‘Etienne, what a noise you’re making!’ she cried to her brother with some impatience,  as he, with all the strength of his lungs, sang something about: ‘Buvons jusqu’à la lie!’, while his glass nearly spilt its whole contents over Lili’s plate. But when she had said it, she was sorry; why should others not enjoy themselves, even if she could not?
The supper was finished, the carriages were waiting for the guests, who left one by one, laden with the presents they had received. Mathilde felt tired, and soon went upstairs, whilst Mrs van Erlevoort and Otto packed up the presents together.
‘What a state the rooms are in!’ said Frédérique, as she kicked a cardboard box aside. Then she approached the table; ah, where was the fan? Eline had taken it away with her. Then she kissed her mother and Otto, playfully rumpled Etienne’s hair, and took her presents upstairs.
Slowly she undressed, so slowly that the chill air made her shiver. And as she, trembling with cold, crept under her blankets, she once more saw Eline before her in all her bewitching grace, in her black lace, smiling at Otto. It all began to whirl before her eyes, like a confused kaleidoscope… Henk dressed up as St Nicholas, with his slipping robe, Jan Verstraeten as Black Peter, the box from London, the fan by Bucchi. 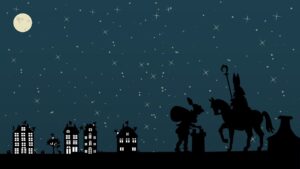 Image by R vT from Pixabay
From Eline Vere a novel by Louis Couperus. Eline Vere was published in 1889 but the custom of giving each other presents, and especially anonymous surprise presents, has barely changed. 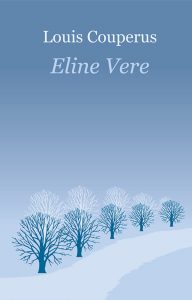