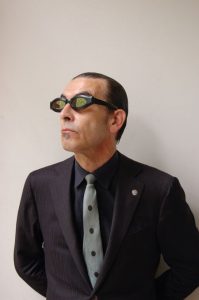 Jules Deelder is a bestselling Dutch poet and writer and is also known as the Night Mayor of Rotterdam. He is a performance poet in the tradition of the Beat Generation, and acclaimed in the Netherlands for his appearances in Dutch media. His recurring themes are Rotterdam, drugs, jazz and the Second World War.

He has lived in London for a couple of years and speaks English fluently.

Born in 1944 in Rotterdam he started writing poetry in the early 1960s and to date has written 36 poetry collections. He publishes his poetry in print but also on records, videos and DVDs. He is published in print by renowned Dutch publishing house De Bezige Bij.

Deelder’s striking appearance and dress sense and many appearances on TV have made him a household name. Whereas at the same time he is also the Enfant Terrible of the Dutch poetry world.

He’s been delighting audiences for decades by his unique way of reciting poetry and his outspokenness about the foibles of the literary world as well as the world in general. What makes his poetry unforgettable is his view of the world and his magnificent use of rhythm.

Transeuropa was first published in 1995 and Holland Park Press is delighted to have published the first English translation of the complete collection by Scott Emblen-Jarrett in August 2019.

After a short illness Jules Deelder died on 19 December 2019 in Rotterdam.